I would like to see a way to flip between presets without interacting with the Keyboard. Perhaps a device such as a PowerPoint slide controller could do the trick.

At this time we do not have any way to interact with ManyCam without using the keyboard or mouse.
We are looking at a bunch of different ways to do this though and are currently evaluating them for a future release.

Touch Control Pro lets you tie in keyboard commands and launch apps through icons on your Ipad, iPhone, or Android. Unfortunately, you have to do all the work yourself, choosing the icons, selection the action or the keyboard command. What’s nice is that if you are a Final Cut Pro user, for less than $16 you can get ready made commands and icons for the hundreds of keyboard functions available in FCP.

Back to using it with ManyCam. I am presently making a set of command shortcuts with icons so I can do a whole live streaming session using presets on the iPad…which includes switching to interview people through Skype, showing a PowerPoint with my image (with greenscreen background) in front of the slide so I can point at it like a weather forecaster. From the ipad I can select ManyCam to be the frontmost app for my keyboard commands and then launch or switch over to Zoom to make any keyboard command changes in it. TouchPortal has more sophisticated actions based on the state of the button…like if you continue to press it, double click it, etc…or whether or not the application is the top application (so if your app is not on the top layer and you accidently hit a button for another application, it ignores the action). At any rate, the only limit are the keyboard commands ManyCam has built-in. May have to use some other Macro app that records mouse clicks and button clicks, but we shall see.

Touch PORTAL Pro? Or is this an ios only app with which I would not be familiar?

Touch Portal is good. Using it to control cameras and also as a sound board. Can switch to scrolling effect but can’t turn off thirds (that needs a hotkey, but we’ll talk about that later. ha)…

But seriously… Manycam should set up integration with Touch Portal. Xsplit, OBS, and Twitch are connected so it shouldn’t be too difficult. Even Twitter capabilities are there. I use it on a Fire tablet to control ManyCam.

Touch PORTAL Pro is custom programmable. You may have to use a third party macro recording program if you need a function in ManyCam that can’t be turned into a hot key.

this is how i get a star to flash on my screen as a reward for a correct answer. i usually show the regular screen 1. i keep the star on screen 2. then i just transition from screen 1 to screen 2 and back to screen 1 after two seconds.
hopefully manycam people and touchportal people will sit down for coffee one day this month… they could definitely put something together pretty easily. 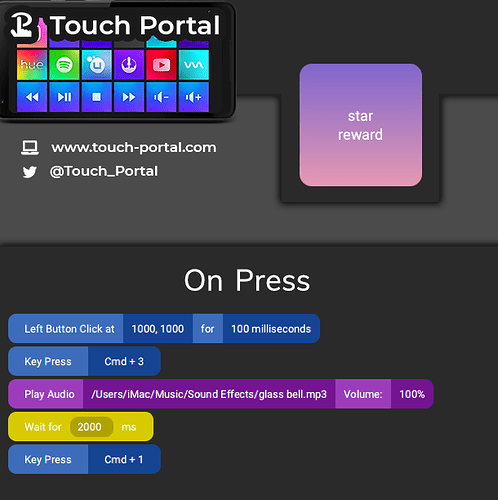 Did you ever put together page in Touch Portal for ManyCam? If so, any chance of you sharing it?