I’m a new user of ManyCam and quite happy with the product, with one important exception: it is effectively unusable with GoToMeeting.

Nine times out of ten, the virtual webcam is inaccessible when starting or joining a GTM meeting (so is the USB camera, of course, since ManyCam is using it). In the GTM preview window, I am presented with an endlessly spinning wait cursor: 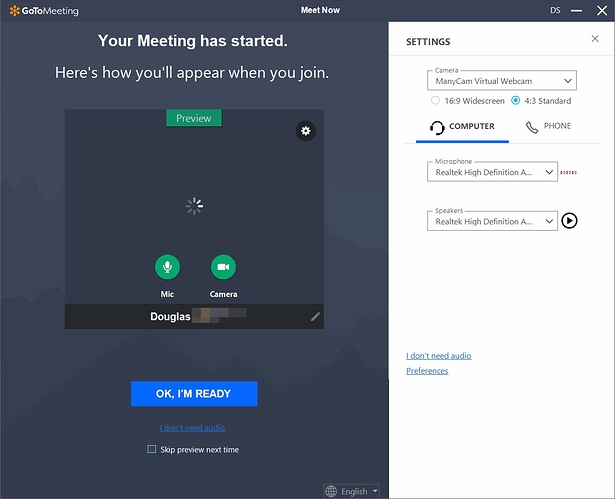 I’m aware from scanning these forums that related problem have been reported over the course of the past year. I do not, however, see any indication that they have been resolved.

I have raised the issue with the GTM folks at LogMeIn, but have not yet received a response.

Any guidance or assistance will be much appreciated.

Additional note: I’ve just discovered that ManyCam wouldn’t work for me in a Zoom meeting I was asked to join. In this case, I had to reboot the system before I could access the physical USB camera (I may have missed a relevant process while trying to kill all the ManyCam related stuff in the Task Manager, of course).

Not always. I use GoToMeeting on a daily basis and have problems with ManyCam since they updated the version with the new interface. I hope this can be fixed from the ManyCam side.

Yes, after trying Narundi’s workaround and having it work successfully several times, it failed to work yesterday in a GTM meeting. I had to shut down the processes associated with both ManyCam and GTM and then launch everything over again.

We have isolated the issue, but won’t be able to fix it as it is on GTM’s end.

Both companies have pretty much the same response on this one: It’s the other guy’s problem.

Early in January 2021, GoToMeeting issued a new version of their Desktop App ( v10.15.0, b19228).
This has made ManyCam INOPERABLE as a video feed to the GoToMeeting Desktop App.
ManyCam does work with the GoToMeeting Web (Browser) version. But the GTM Web version is not as capable as the Desktop App.
The only work-around I’ve found is to interpose SplitCam between ManyCam & GoToMeeting.
(i.e. Video path is Webcam->ManyCam->SplitCam->GoToMeeting)
Though clumsy it does work very well.

This raises the observation: If The SplitCam/GoToMeeting interface works so well, some/all of inadequacy lies with ManyCam (it’s not all GTM’s fault).

So ManyCam please fix your Video feed interface methodology so it works with GoToMeeting!

In the past selecting real web-camera in GoToMeeting and then switching back to ManyCam Virtual Webcam was a workaround. Can you try it in the new version?

Hi IEO, I ran several tests. But could not get that to work.
I tried starting GTM; then pre-password, selected my Webcam, after which I started ManyCam: that fails because ManyCam sees the WebCam is use by another program.
Also tried several other sequences which all resulted in the never-ending circle of dots when GTM is waiting for video.
If there is an exact sequence you want me to try, please let me know.

Hi @Narundi,
What works for me:

Hi IEO,
I’ve been using your suggestion (2 ManyCam virtual cameras) with GoToMeeting.
Pro: It is easier to set up than routing the video through a 3rd party program.
Note: I have not yet Uninstalled SplitCam.
Cons: Two I’ve identified (which may be functionally related):

Note: this feature is beta.

02-Apr-21: Installed the Beta and have done first live usage with "ManyCam Video Device”: No problems to report.
I will remove the Dummy Webcam (which I had used as the work-around) and continue testing.
Narundi (Roger)

We have received your crash dumps, thank you, and we currently looking into the problem. In the meantime, could you please try disabling HTML notifications and check if the issue persists? 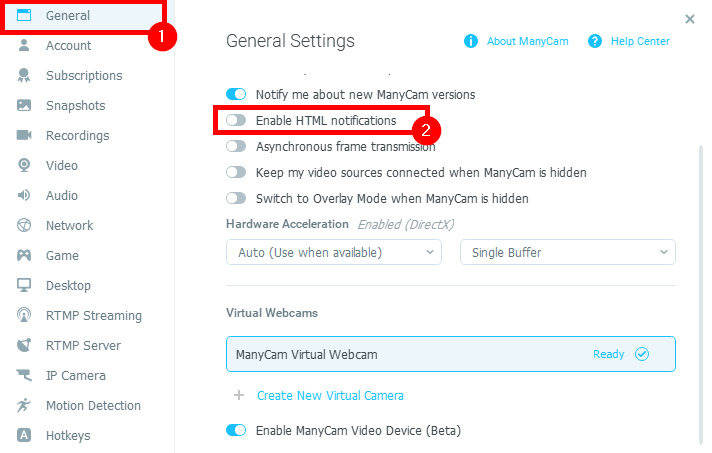 HTML Notifications now Disabled (22-Apr-21).
I will monitor and advise you of results.
Narundi (Roger)