I have used ManyCam for several months with no problems, but I began having problems after a Windows update.
I use two presets that show custom areas on the desktop. I will teach one class with no problems. I change the materials in the custom areas for the next class and start ManyCam again. The presets do not show the changes. They will show the previous pictures and sometimes it appears that my mouse is on the screen about 100 times.

I have tried closing and reopening ManyCam.
Deleting the presets and making new ones. ----Both attempts do nothing to change the picture. I have to restart the whole computer. I can’t do this between classes. I don’t have time

I have reinstalled ManyCam twice now. Is there anything I can do to fix this?
If I can’t fix this, I really can’t continue to depend on ManyCam.

Please send screenshots and a DxDiag report to our Support team at support@manycam.com

@Mikhail , I am having the same issue, See the attached screenshot. It should be showing the thanks for contributing section of this web page…however it is showing the start page of a new Chrome tab…the even stranger thing is that I have NO OTHER sessions of Chrome running. I do have a Google Translate tab open…but it is not showing that either. 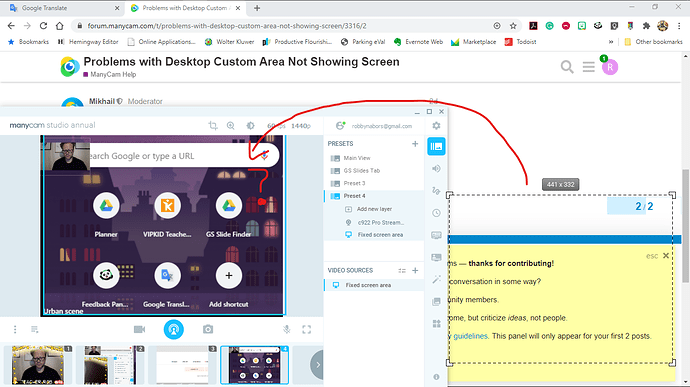 @Rob1 @brit Does this happen on wake up/unlock screen of your PC/notebook or just always?
I mean you add a custom area then lock to the login screen or send your PC to sleep and after waking up or unlock it shows old data?

Deactivating(!) this option also should help:

I am having the same issue. The custom area I chose is not showing. Instead, a previous “video” is showing.

I "fixed’ the problem by un-selecting “Accelerated capturing (Windows 8.1 or higher)” under my Desktop Settings.