I’ve experienced more crashes than usual after latest update on late 2013 iMac with Mojave. As I shop new computers, I would like to know if ManyCam supports eGPU, thank you.

I am wondering about that also. My CPU is getting hammered on my 2017 MacBook Pro 3.1 Ghz quad core i7 with 16 gig or RAM. Just setting up my presets and not streaming or recording and I’m at 97% utilization…but I am using the latest beta that offers support for cropping video feed layers.

Tried today and the performance isn’t great. Running a Razer Core X with AMD 5700XT attached to my 2019 Macbook Pro. Video performance is choppy at best. I get better performance with the internal Vega 20.

On my 2017 MacBook pro, I’m getting a very noticeable improvement running a Razer Core X with AMD RX 5700XT with 8GB ram. So far, I’m recording to disk in my testing, but I have 40Mbps upload bandwidth.

I’d be interested to understand how you’re leveraging the eGPU and the use case.

For me, I’ve gone into ManyCam’s settings and selected “AMD Radeon RX 5700 XT (default, external)” for “Use Video Device” under the General settings. I haven’t changed anything else. Note that “Hardware Accelleration” is “Enabled (Metal)” for me.

When doing so the real-time video playback in the ManyCam application, is very choppy and jerky when using my external Logitech Web Cam. Interestingly, I do not see the same choppiness when using the built-in FaceTime Camera.

Further to my last, I was using the Logitech Webcam through my CalDigit Thunderbolt Dock. I do not experience the choppiness if the camera is connected directly to the MacBook…

I read in some other forums online that the newer Macbook Pro 2019 and the AMD Radeon RX 5700 XT was having some issues working correctly with Catalina 10.15.4 which could be part of what you are running up against…a software driver issue. I found the eGpu is picky about what else I connect via USB to it, especially if it requires bandwidth. I took other hard drives off of it. I am driving an Apple Cinema HD 2560 x 1600 screen and have set it as my main monitor rather than the laptop screen. I added an HDMI TV with max resolution of 720p…but FCP would not output to the TV that way. So, I had another thunderbolt 3 dock with an HDMI out and connected to the TV and FCP and the egp stopped crashing. I dialed things back to single display setup on my FCP and Motion apps and have used it for a week now without crashes. I am now setting up custom 3 screen layouts for FCP and Motion using maximized windows rather than full screen settings. I’m saving my screen layouts for my various workflows with the apps. With Manycam I am making complex composite screens, bringing in extra cameras (iphones running Manycam app), bringing in a Skype caller in a split screen for interviews…and then a 3 way split with myself, a Skype caller, and a Facetime caller, and a PIP with a Powerpoint presentation and myself added with greenscreen behind me. I have a separate microphone and I am using my Nikon D7000 to input video…although my testing has been with the built-in Facetime webcam (waiting on the HDMI to USB adapter). I am frustrated with the lag of features on the mac version of ManyCam compared to it’s Windows version. I have looked at OBS and eCamm but I am going to stick with ManyCam for now since I have a lifetime license with it. My end product is being streamed out through Zoom in webinar type fashion but I am looking at options like restream.io for simultaneous streaming to social media. I monitor my CPU usage and graphics card usage with the Activity Monitor that comes with the Mac…I am maxing the usage when I have Facetime, Skype, and myself greenscreened on a single preset…and streaming it all through zoom…I am tempted to do my interviews before my livestream and record them then add them to my live streaming “show” so I won’t crash my setup during a live streaming show.

Late 2013 27" iMac 3.5ghz quad core i7 with 32gb RAM and NVIDIA GTX 780M 4gb : ManyCam would always crash at 25FPS 1080p, usually twice per hour. I was forced to use only one camera at a time to prevent crashing. I used to capture Quicktime app wondow, then version 7 allowed for native capture.

Still, I am concerned that ManyCam is not optimised to take advantage of a multicore workstation.

Dialed it back, heh? That is quite the setup. May I ask for you to post a screen shot of your Activity Monitor at full tilt? 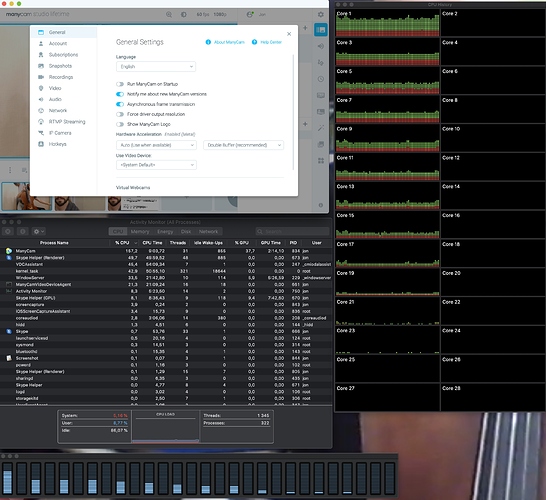 I took the advice of another question on the forum and enabled “Asynchronous Frame Transmission” while manually selecting “Metal”. Does anyone have an idea about reducing the buffer? Thanks