We are happy to introduce ManyCam 7.8.0.43 for Windows. You can download this update for free from our official website. This version contains the following new features and improvements:

Is there a possibility of using portrait view in ManyCam for Windows?

YES!!! The ability to save and export / import multiple show programs is HUGE! Thank you for this!!!

I don’t think this update plays well with Zoom. Today, when using ManyCam to feed a live camera, a video and various still photos into a Zoom worship service hosted by someone else, everything coming from me (as a feed into Zoom form ManyCam) was a brilliant green-tinted screen when viewed by any other participants in speaker view. Everything looked fine on my end, and also looked fine to everyone else so long as they were looking at my feed in gallery view, but something about the signal couldn’t stand up to being spotlighted in speaker view. So I had to ditch out of ManyCam and participate directly in the Zoom call without ManyCam, which made the problem disappear. Any thoughts?

A major step in the right direction on the ability to save all presets as a project!

I immediately tried it with my 24 presets and 6 IP camera setup at church and came up with a giant failure. Please be more specific about what you mean when you say ‘preset layout only’. I found that only two of my 24 presets were saved when I specified a files named ‘Presets’ instead of the default and put it in a desktop folder called ‘Presets’ instead of the default.

Please provide some guidelines on what to expect from this new feature and what your plans are to make it more complete in the future. It took hours to rebuild the presets I use for a typical Sunday morning service.

@DonaldG Can you send your Presets file to support@manycam.com so we can check what is wrong?
Thanks in advance.

FWIW, I too am experiencing the ‘green image’ thing on my Zoom calls. Everything looks great on my end but the folks on the other end are getting a bright, totally green image of me. Nothing I’ve tried fixes this.

However, when I quit ManyCam and switch to Logitech’s ‘LogiCapture’ app the problem goes away and everything on both ends of the Zoom call looks the way it should … So … definitely a problem with ManyCam.

As an FYI, I’m on Win 10 and running the latest versions of both Zoom and ManyCam. Hope this gets fixed quickly!

@WJF @benjamin.cowgill Hmm, can’t reproduce on latest Zoom (5.4.6 (59296.1207)) and ManyCam.
Do you have any specific settings in Zoom, for example HD or Original ratio (BTW if they off try to turn them on and see if it helps):

Can you (and your remote participants) also share Video Stats during the problematic call: 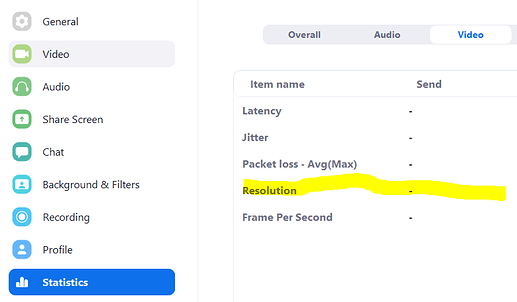 In Zoom’s video settings I have “HD” checked and “Original Ratio” Unchecked". I played with both of these settings in one of my problematic calls and it didn’t seem to make a difference in getting rid of the green.
I mentioned that the problem went away with Logitech’s “LogiCapture” app and can now also confirm that the problem doesn’t appear when using the latest version of OBS.

I’ll try to get you some video stats from Zoom the next time I use ManyCam but to be honest, since teaching on Zoom is my business and only revenue stream, I’m using OBS for now since it spares me the green image difficulty that I’m having with this latest version. I’ll give ManyCam a try next time I have a family Zoom call and send you some stats.

@WJF Thanks for the reply. The reason I’m asking about resolution is because ManyCam supports YUV formats in many many combinations of resolutions/crop and if client software interprets it wrongly it may result in something like this: https://i.stack.imgur.com/RK7xn.jpg
Other software or real webcams may have less options thus the issue doesn’t happen.

THAT’S IT!! That’s exactly the image my students have been seeing!
I’ve been using ManyCam f-o-r-e-v-e-r with the same presets and configuration. The problem just started with this latest version but I swear to you, I haven’t messed with or tweaked any of my camera or ManyCam settings.

Regardless … what parameters would you suggest I use for the best possible image quality in Zoom and where would I find them? I’m up for trying anything!

And THANK YOU for figuring out the green image thing! When it was just one student reporting it, I thought they were nuts but then every other student got the same thing and I just couldn’t figure it out …

BIG NOTE: downgrading is not officially supported and installing older version over newer may result in data loss (mostly effects). It is recommended to backup your data before downgrading: make a copy of entire %AppData%\ManyCam folder (notably settings and state_storage files) before installing old version (close ManyCam completely by Ctrl+Q). On any error/data loss install newer manycam, close manycam and replace that folder from you backup. Making a periodic backup of this folder is a good idea.

Friends, I was able to stop the “green screen” problem described in this thread by turning off (un-checking) all of the hardware acceleration options in the video settings of Zoom.

They can be accessed through the video settings of an active Zoom meeting. Click on the “Advanced” button after opening video settings, then un-check all three hardware acceleration options.

I am suspicious that this has recently become a problem with Zoom for reasons unrelated to ManyCam. I have read that Zoom has made some compromises on its ability to handled HD content, in order to keep up with the growing demand for basic videoconferencing services. The use of hardware acceleration might be pushing a stream into Zoom that it cannot handle. Just a speculation.