"Get More Effects" from within ManyCam - Where are the files?

Since I’ve created and downloaded well over 1,000 effects I keep a folder of these as a backup in case I ever need to reinstall ManyCam.

Since the new Version 7 has been released and we can download effects from WITHIN ManyCam (also, drag and drop effects into a preset window and automatically create an effect) I’m interested in knowing where the files are located so that I can save them as a backup, just in case.

Also, since the tags other people create are not always the same tags that I would like to use to search for an image, I’ve been missing a better tagging system, however in the new version 7, I’ve seen that the names of each effect can be modified which will re-order the effects in it’s category (in alphabetical order) and ALSO allow it to be searchable.

As a solution for the search function, I’ve spent hours adding multiple identifiers to the name. Now, the problem is, I don’t know how to back up all of my work. I’d like to make a back up of all the current effects that I have, including the new ones that I’ve downloaded from within the app, and the modifications that I’ve made to the effect names, also from within the app.

Thank you for any tips!!

@ieo in a different post you wrote the following:

Beta may be unstable, so I recommend to copy entire C:\Users\**your_user**\AppData\Roaming\ManyCam folder into safe place, try to install beta and if it fails, install stable version and then copy the folder above back. It is also a good idea to make backups from this folder from time to time, it contains all your effects and other settings e.g. presets.

Yes. All your effects files (created in manycam or downloaded from anywhere) are copied into this folder: C:\Users\**your _user**\AppData\Roaming\ManyCam\Effects. If you copy this folder into new machine, ManyCam will read this folder and add all effects. If you renamed any effect in ManyCam and want to backup/transfer this change into another machine, you also should copy C:\Users\**your_user**\AppData\Roaming\ManyCam\state_storage file.

BTW, you could check that your backup works by creating new WIndows user, running and closing ManyCam under this new user, copying folders and files above to the corresponding directories and running ManyCam again.

Hi @ieo
I followed your instructions as you stated in this post. Unfortunately, when I installed the Beta version. I lost all of my folders and all of the renamed effects. As you suggested, I copied the state_storage file and when I tried to replace the beta version with the state_storage file from my highly organized copy, I now get a message stating that the file is corrupted. I’m so upset that I lost all my work. I literally had spent days organizing it, and it’s all lost. 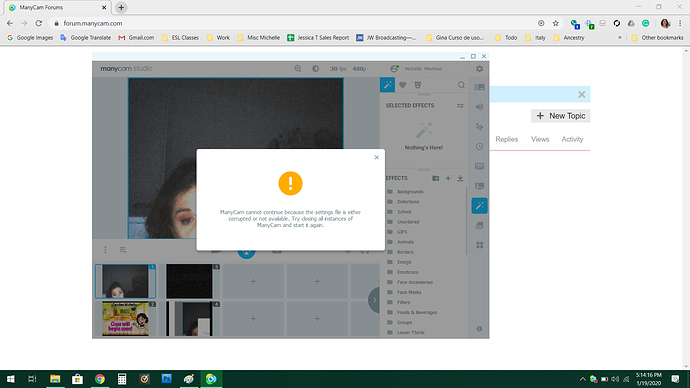 SERIOUSLY saved by GOOGLE DRIVE today. I had made a backup of the state_storage file a few weeks ago when you first posted this… and then I replaced it with the one I did today before I reinstalled everything. The ORIGINAL state_storage file downloaded correctly and it WORKED restoring all of my file names and folders, the one that I did today somehow corrupted and did not work. THANK GOODNESS I did the back up twice. I’m so relieved. It isn’t exactly the same after installation, some things are out of order and there are additional folders, but overall, I can work with this. PLEASEEEE give us an easier way to back up the organizing of effects!!!

Greetings. I have the same exact question (but within MacOS vs. Windows) about where to find files for ManyCam effects that I have: 1) downloaded within the app within the last 6 months; 2) changed their names; 3) dragged and dropped into the effects panel. I added and made these changes to effects within ManyCam using Mojave and now Big Sur and I’d like to migrate them all to a new Windows device. Additionally, is it possible to migrate the new “Group” folders I have created containing selected ManyCam effects?

As per instructions online for saving and moving ManyCam effects within MacOS, I copied the state_storage file as well as the Effects folder within the hidden library (C:\Users*your _user*\library\visicom\ManyCam…) to iCloud, and then to a Windows laptop. Many of the effects, however, that I had downloaded within ManyCam using Mojave OS are no longer amongst the effects showing up in my effects folders now in ManyCam for Windows. Furthermore, none of the new “Group” folders with selected effects migrated. I know some effects are only for Windows, while others are only for Mac OS, but many of the missing effects downloaded in MacOS that I have begun to re-download in Windows seem to be available in the ManyCam library for Windows as well. So I am suspecting that I simply have not yet found and migrated the files and folders from my OS device to the new Windows device.

I am unable to find the path (C:\Users*your _user*\AppData\Roaming\ManyCam\Effects) that you ManyCam directed Chellbell to in Dec. '19. I suppose that path applies to Windows and not MacOS, yes?

Is there anywhere else I may look for the missing effects files on the Mac ? Or is there another step necessary to have them migrate and appear in ManyCam folders in Windows now?

Thank you for any guidance.