Hi, in last version (5 and before) it was possible to set transition for single clip within a play list. In latest version (6.7.12) I can only set transition between playlists and not for single playlist items. It always fades to black before it changes to selected clip. Do I missing something or did this feature simply disappeared? Thanks!

Welcome to the community. You can set custom transition by clicking on a preset. From the drop-down list select Transition: 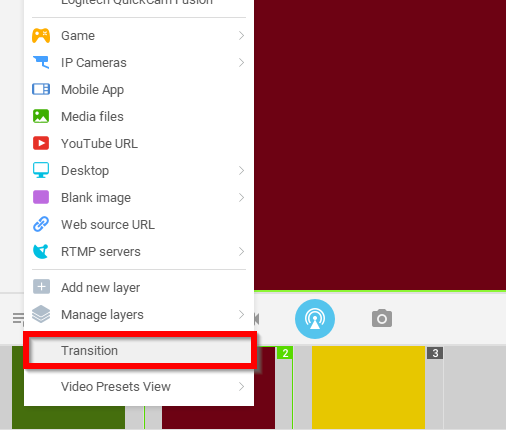 This is not on the playlist though, but this seems to be the feature you described.
If you need to set custom transion on a playlist, it will be applied to the whole playlist (not a single playlist item), see more here.

Thanks Mikhail, the second options is the one I need. But, unlike the first one (transition between playlists), where IMMEDIATELLY is switched from one playlist to another at “cut” transition, needs transition “cut” between the single clips of the playlist about half second. In this time the screen becomes black before the selected clip starts to play, and this is the disturbing part. Is there something I can do to avoid this delay (black screen) and have the same “cut behavior” like between playlists (without delay)? Thanks!

Could you record a video showing the entire process from scratch? I’ve tried to reproduce the issue, but no luck so far. It’s better to upload the video to cloud storage and make the link publicly accessible.

Is Hardware Acceleration enabled (ManyCam Settings -> General)? Also, what are your specs?

I was able to reproduce the problem, no need to send the video. We’ll get to it as soon as we can, thank you for reporting this.

Sorry to Necro this, but any word on this problem? I’ve running into the same issue and would really like to solve it.