I would like my effects in my categories to be reorganized alphabetically when I rename them. For instance, I want to be able to put all my chickens together in my Bird folder and have them together as chickens, separated from the turkeys and robins. If a chick is prenamed “egg and chick” in the system, it ends up in the “E” section for “egg” with the egrets and not under the “c” section with the chickens even though I change it’s name to “chicken and egg.”

If I had the power to rename AND it would be reorganized by the system alphabetically, I could find my objects so much faster while in an online class with my student. It would make for much smoother transitions.

As it is now, effects are all over the place within a folder because the system will not move the object alphabetically to where it belongs even though I change its name. To me, this is a crucial feature when the user has hundreds of effects in folders.

In fact, it will reorganize alphabetically, but I had to compeletly close out of Manycam and then open the program again before the system recognizes and reorganizes them alphabetically by the new name.

How did that work for you? I tried not only doing that, but rebooting my computer too and no change. Even ManyCam says they did not program their software to do that. Perhaps it is the version you have? I have the newest version for Windows 10. What do you have?

Seems like manycam should constantly scan a pre-existing folder on your computer— I use google drive. That way,
all the tagging per file (meat, chicken, sticker) on your computer remains intact,
you don’t have to add objects twice (computer and manycam),
and the folder is shareable (Dropbox/Google Drive/ Whatever
2 cents

It’s really strange that it worked so simply for me and it’s not working for you. 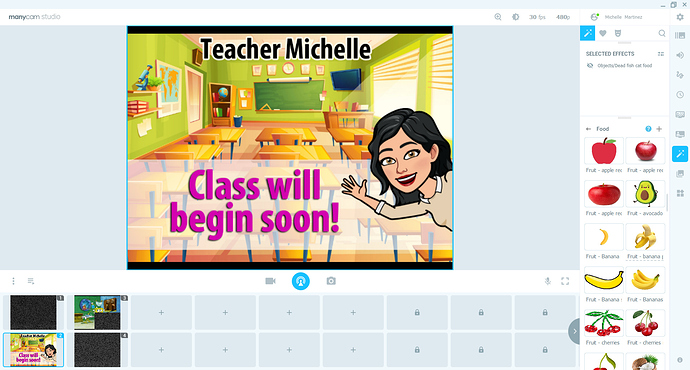 image.jpg1920×1030 494 KB
Check out the screenshot… I created the folder “FOOD” and then from within ManyCam I changed the name of each individual effect. For example the ones at the top are called “Fruit - apple red” the next one is called “Fruit - avocado” and it automatically organized it below the apples. Next, “Fruit - banana” and so on… I’m using ManyCam 7.0.6.2 on a Windows 10 PC.

Maybe a moderator could offer some more insight? @ieo